In June, a few members of the TSI Research Team attended the CIPD Festival of Work Conference which ran from 15th – 16th at Olympia Exhibition Centre in Kensington, London. Attending on the second day of the conference, they were joined in the conference centre by many visitors from a wide range of organisations looking to delve deeper into the changing world of work and HR. There were around 100 stalls showcasing HR organisations, think-tanks, tech-firms, wellbeing companies and charities, with different talks and discussions being held at each. Following is a brief overview of their day.

We were keen to attend some of the conference talks in order gain insights into the current conversations around employee experience.  One of the most interesting talks we attended looked at the current challenges facing organisations as they try to attract and retain talent in what is an increasingly difficult job market for employers to negotiate.

The speakers’ views echoed an impression we have formed from the results of our recent engagement surveys:  that employees are increasingly expecting things that were once considered perks, such as remote working and flexible hours, as standard.  It was interesting to see, however, that the speakers did not see the four-day working week in the same bracket as flexible working and were less convinced of its benefits for employees or employers.  With the four-day working week an increasingly popular and widely-discussed idea, it will be interesting to see how the conversation changes as more and more employers offer it.

Perhaps the most interesting point the speakers made was that workplaces should be willing to experiment with their working practices and take suggestions from staff.  They made the point that, left to their own devices, teams often come up with innovative and effective working methods themselves, which may suit them better and are more popular than those imposed upon them from above.  This mirrors some of the frustrations we often see amongst employees when they feel they are micromanaged or are unable to take initiative or innovate in their roles.

As part of the exhibition, there was a Wellbeing Village offering visitors an environment to relax and take time out. It provided sessions throughout the day to focus on giving your mental health a boost. Sessions included massage, yoga, breathwork and mindfulness. As a team, we participated in a Breathwork session which was enjoyable and interesting to see how just 10 minutes of focusing on breathing can alleviate some stress or any heaviness we were feeling. 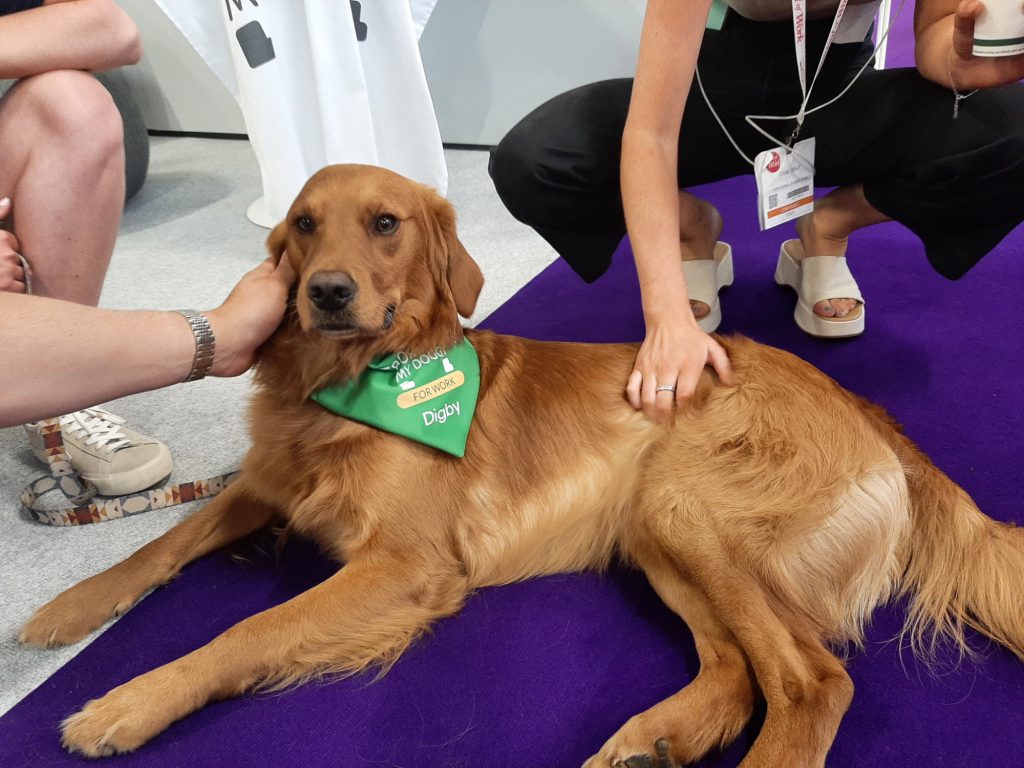 We were also offered the opportunity to spend time with some furry friends by BorrowMyDoggy! BorrowMyDoggy is a great employee benefit scheme where staff get help looking after their own dog, or spend time with one, either during or outside of working hours, in or out of the workplace. This unique initiative supports staff mental, physical and financial wellbeing. It essentially aims to help you relax and unwind, and spending time with Digby (a golden retriever) did just that!

This website uses cookies to improve your experience while you navigate through the website. Out of these, the cookies that are categorized as necessary are stored on your browser as they are essential for the working of basic functionalities of the website. We also use third-party cookies that help us analyze and understand how you use this website. These cookies will be stored in your browser only with your consent. You also have the option to opt-out of these cookies. But opting out of some of these cookies may affect your browsing experience.
Necessary Always Enabled
Necessary cookies are absolutely essential for the website to function properly. This category only includes cookies that ensures basic functionalities and security features of the website. These cookies do not store any personal information.
Non-necessary
Any cookies that may not be particularly necessary for the website to function and is used specifically to collect user personal data via analytics, ads, other embedded contents are termed as non-necessary cookies. It is mandatory to procure user consent prior to running these cookies on your website.
SAVE & ACCEPT